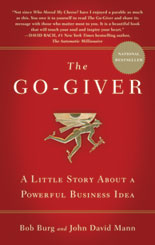 Before i discovered personal development, I used to suffer from a massive lack of self-confidence and had a lot of insecurities. But it wasn’t until my Brother in law at the time gave me a book to read, which provided me the first glimpse of the ‘self help’ industry and how there are actual authors who write about it with a growing audience.

Since then, i’ve become fascinated with how a person can actually improve themselves with the use of tools, books and other means of information. Since that time, I have gone on to consume a range of material on the subject.

But there are rare occasions where I sometimes come across a book that really captures and inspires me. One that is so simple to grasp that it catapults you into taking action and to make radical changes in your life. One such book is called ‘The Go-Giver’

Having read the book a number of times, i’ve decided to write a review of the go-giver and to give my views on how the book influenced me and how it became relevant to building my self-confidence.

When you first lay eye’s on the book, you will be surprised at how short and simple it is to read. It took me a few hours to read through all of it. But don’t let it’s size and length fool you. While it’s simple to read, many of the concepts the book covers often require multiple reads in order to gain a better understanding of what the book tries to teach you.

The concepts are so easy and straight forward, that you are often left wondering how you failed to figure out the concepts intuitively as most of it is common sense, yet rarely applied on a day-to-day basis.

The book tells the story of Joe who’s a ‘go-getter’. A hard working fellow who tries his hardest to rise through the ranks in his company but reaches stumbling blocks along the way. Feeling worn out and frustrated, he eventually comes across key senior members of the company who each give him a timeless and powerful concept, which put together form the blueprint to success and prosperity in life and in business.

The authors of the book recently created a brilliant animation that briefly explains the book in it’s entirety.

When I first read through the book, i realised that while the book covered business concepts and principles. It was also something that could be applied to everything. And it was this understanding that empowered me the most since it manages to capture simple concepts in an engaging and concise way, which if followed allows anyone to live a happy and fulfilling life.

Having since read the book a number of times to this day, I decided to fire up my video camera and hit the record button. Being nerve wracking as it was to record myself giving my review on camera, it perhaps gave me a clear understanding as to why it’s so important to be authentic. It allowed me to put forward all of my flaws, insecurities and worries in front of a wide audience for all to see.

I explain how the book impacted my life and how the concepts related to self-confidence in a way, which allowed me to follow a simple road map in order to make rapid changes.

By this point, I really wanted to talk to the author ‘Bob Burg’

and to get his take on the book and whether my theories and influences from the book was actually correct.

A lot of topics were covered, from how important it is to give value to why being authentic allows others to trust and respect you.

It was a really interesting and educational interview, and one in which was a first for me personally since i never really interviewed anyone before. Fortunately, Bob was pleased how it all turned out and thanked me for the time I took in preparing it.

The interview gave me new discoveries, which i wasn’t able to grasp having initially read it and ended up making notes:

If you’re serious about building a fulfilling life for yourself in all areas, then i can’t recommend this book enough. It will give you insights and ideas, which will change your life as it did for me back when I read it for the first time a few years ago. More than anything, it will open up a new way of seeing the world and will go from being a consumer to a giver, which in my opinion is the very essence of what defines life in a nutshell.

You can purchase his book through amazon, which i’ve included a link to below.

For more information on Bob Burg and his Services. Please take a look at his website: www.burg.com