[quote style=”boxed”]Knowing you’re afraid isn’t what matters, it’s what you do in spite of it that counts.[/quote] 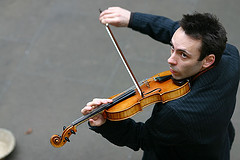 When I was 11 years old, I remember walking up on stage for the very first time having been invited to perform the Violin at my school – I was terrified!

Coping with fear wasn’t easy, with each step up to the stage being one step closer to actually performing live in front of a 200 strong audience. Every mistake would be heard, every nuance in my performance would be noted.

It was bad enough that I wasn’t popular at school or noticed by others as someone to take seriously, but I knew that this performance would either make or break me for the remainder of my school life and perhaps my entire life.

Looking back, it was probably one of the best things to have ever happened to me.

Playing the Violin and performing in Orchestras was a phase I went through not because it was something I wanted to do but because at the time, I wanted to feel part of the crowd due to my friends wanting to take classes.

The things I learned from it over the years was something I could never buy or replace.

Little did I know at the time that the simple act of playing and performing would teach me valuable lessons to face my fears and to become comfortable in it.

A lesson that i’ve managed to embrace and act on to this day subconsciously.

It’s often said that facing fear is a bad thing, which many people tend to avoid as much as possible. But perhaps you’ve read articles about it like the one i’m writing explaining why it isn’t and that the best way to get over it is to face it… Easier said than done right?

But the truth is, it is!

Looking back at all of my problems, I have not once picked out a single thing that involved anyone but myself. The person that stopped me from growing as quickly as I hoped all came down to me and my negative mindset. Fear induces negativity and the ‘worst case scenario’, which in turn causes us to over think and become paralysed in the process.

And while I could try to break down how this can be solved. I really can’t tell you a concrete process to follow in order to face your fears.

But based on my personal experience, there are pretty much 2 things that causes a person to push through their fears, which are:

If I were to tell you that you would never progress in life despite feeling depressed about your current situation and doing the same things you always do, would that make you afraid?

How would it make you feel if I then said that the only way to change it is to face your fears and risk failure?

While fear is a scary prospect, perhaps there is nothing more scary then to look into the future only to realise that your circumstances haven’t changed due to doing the same things you’ve always done.

Albert Einstein once said in his famous quote: “The definition of insanity is doing the same things over and over again and expecting different results”

In truth, there really isn’t any other way to make progress in life without facing your fears. I explain this in detail in my free YOU 2.0 course.

Your fears will never go away and is in fact nature’s way of telling you that it’s an opportunity to grow and evolve.

I’ve made this post short for a reason, because it’s simple. If I could give you one action point to bare in mind the next time you’re afraid of something, it would be this:

Tell your inner chatterbox to Shut the F**k up! and do what you were set out to do anyway 🙂

Is there anything in your life that currently scares you? Let me know by leaving your comments below.

13 replies to "Fear Will Never Go Away, Here’s Why It’s A Good Thing"