[quote style=”boxed”]If you enter battle without knowing the rules, be prepared to fail[/quote] 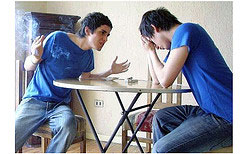 Back when I was younger, I used to do whatever I could to avoid conflict. I hated it so much that I would automatically go on the defensive and act ‘nice’ in order to stop it from happening.

Naturally, this had caused a lot of problems with my self-respect because the more I accepted conflict from other people, the more it would affect me knowing deep down that it’s not something I really appreciated.

It’s almost as if people are prone to testing you to see what they can and cannot get away with when it comes to their dealings with you and if you’re not careful, can let it ruin your life and reputation as a human being.

As I started to develop a better and more in-depth understanding of social dynamics and human interaction, I began to see the psychological ploys and the manipulation people tended to naturally use on each other in order to test to see where in the ‘pecking order’ you fit in the social hierarchy.

Naturally, before understanding any of this, I was always at the bottom of the tree. For anyone who was bullied at school, you could probably pin point when this was (Being picked last in a game of football, not being respected by peers, girls you liked not liking you back, being an apt pupil who ‘did what he was told’ etc.)

Most recently, this has been a major problem in my working life where I was simply unable to defend myself in a manner that showed my colleagues and manager that I was a high valued person in the company, despite the fact that I worked my ass off to get things done in the way they preferred.

Naturally as i’ve gotten older and more experienced, I began to take note of people’s behavior towards me, started to notice patterns and developed a sixth sense of a person’s communication and manipulation attempts.

Typical things such as:

It’s become clear to me now that a person’s self-confidence and self-esteem isn’t really determined by what they do, but how they respond to the outside world.

Something, which has taken me years to learn and am still having challenges with. But this article should hopefully serve as the foundations of my current knowledge of the topic and will also provide a change of mood as to what’s commonly found in my blog write-ups.

About a week or so ago, I came across a video that was heavily shared on Facebook of an interview with Russell Brand done by MSNBC. It was essentially to talk about his new project ‘The Messiah Complex‘, which ends in a pretty hilarious tone but one that is also very powerful. It was clearly something that people took notice of hence the reason why it was shared so much.

Perhaps the thing I noticed the most was how the hosts of the show were attempting to passively mock and put him down, which Russell cunningly manages to deflect and turn around in his favor. Something, which I wished I was able to do when I was younger.

Before I go onto break down the dynamic of the interaction, be sure to watch the video in it’s entirety:

Having observed the video, I have broken it down into 4 key points, which you can use to apply in your own life and to hopefully prevent it from happening to you:

1) Never react to a person’s petty attempts to belittle you.

Throughout the interview, there are numerous situations where Russell is being passively mocked by the hosts. Note around the 00:20 mark, Brian makes a statement about “showing off his chest hair”, which is clearly an indirect attack on Russell’s dress style. There is yet another mocking attempt, but this time done by Mika after Brian states he would like to ask Russell a ‘serious question’. Mika simply responds with “Try, it’s never going to work”.

What Russell displays quite successfully is his ability to not react to any of it and to instead do the opposite of what was expected of him – To act professional and well mannered. This shows a degree of authority, respect and lack of care to what the hosts think about him, which incidentally lowers the hosts for behaving how they’re behaving.

Russell is also never shy on being polite and kind throughout the ordeal and not once loses it or lowers himself down to their level.

The biggest mistake we tend to make when it comes to people we trust is the fear of causing tension so as not to hurt the other person’s feelings. While it might make sense on the surface, the consequences of bottling up your feelings towards an individual will always lead to hurting your self-esteem as you’re avoiding the situation at hand and not resolving it on the spot.

In this instance, Russell points to Mika her rudeness for mentioning him in the third person while he’s present in the interview. What tends to usually happen from my experience is it either goes 2 ways:

1 – They argue against you and attempt to flip it around by labelling you as ‘sensitive’ and lose you as a friend.
2 – They start defending themselves and to try and win you over.

Either way, you’re in a winning position. The people you lose in your life never belonged in it to begin with. And the people defending themselves are now well aware of your value and dignity as a human being.

People are usually very quick to judge others based on external influences, which Russell cunningly points out to Brian. This goes on to explain the professionalism of Russell’s actions in order to avoid rising up to the expectations of the hosts that were interviewing him.

In real life principles, this is very very powerful because it simply states that nobody dictates who or what you are besides you. And this also includes how you feel and how you should react to others, which in most cases is done through manipulation and instigation.

Perhaps you’re in an abusive relationship with friends or family. This is a perfect example to how this principle can be applied, which incidentally can lead to improving your self-esteem dramatically.

4) Always lead things where you want it to go

If you tend to find people acting flaky and dubious with you when it comes to plans, meetings or actions. It is usually because people lack respect in your time and attention and would rather use up your time for their own benefit or self-amusement.

Towards the end of the video, Russell points to Mika and say’s “Let me help you”. It is clear that he is now in the drivers seat and doing what he was there to do, which was to promote his new project.

The best way to communicate this with people is to be straight and direct. Some people might not like this preferring to communicate indirectly. But in order to increase your self-confidence, you must state your intentions clearly and with complete conviction in order to show others your integrity and sense of leadership.

Having answered a few emails of a few of my readers recently about the personal problems they’re currently having. It has constantly stayed in my mind for weeks and eventually understood that the key problem is communication. And not just in the ability to speak, but the psychology behind how and what should be said in order to resolve it.

God knows, i’ve battled with this throughout my entire teens and most of my twenties only to realize that whilst my communication wasn’t really the problem. It was the underlying motives behind a person’s use of language that I had to learn to deal with.

Hopefully, after reading this article, it should equip you with at least the basic knowledge, which you can then take away and develop for yourself and to ultimately learn how to avoid conflict in the long term.

Meanwhile if you have any questions or ideas of your own, please be sure to leave your comments below…