[quote style=”boxed”]You are very powerful, provided you know how powerful you are. – Unknown[/quote] 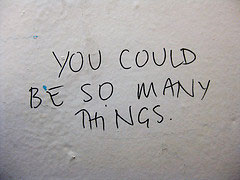 When I was younger, I used to often compare myself to others and wondered whether my behaviour was good or bad. This continued to grow as I became older and would often question what I was doing wrong due to being unpopular and getting bullied by my classmates.

Without realizing it, I started to believe that in order to be considered ‘normal’ and part of the group, I would have to try to change in order to fit in with everyone and to be liked.

This whole notion continues into adulthood and is often more complex than social pressure.

What makes things worse is that we’re constantly bombarded with visual imagery of successful actors, actresses and models, which give us a subconscious anchor to live up to. And if we’re can’t, are forced to believe that something’s not quite right with us and that we’re lacking in one way shape or form.

Advertising and influence plays an important role in getting people to make a purchase because of the above facts. And are made to be influenced enough that we go out and make a purchase in order to live up to those ideals.

What would the world be like if we were encouraged to believe that who we were, was enough?

I often asked myself that question all the time and have always wondered what could be done in order to change the environment we currently live in.

It was then that I eventually realized that the only thing we could really change and have control of is ourselves.

Once I began to understand the ridiculousness of it all. I started to appreciate myself more and more and understood that in order to be liked and appreciated, I would have to accept myself for who I really was and to embrace my uniqueness as a human being because no one is really quite like me in the world. Sure there will be similarities, but ultimately we are all different.

This never really hit me until I was laid off, and consistently going from job to job. I remember walking 14 miles from the office to my house in the freezing cold British weather, wondering what it was that I was doing wrong. Trying to make connections with the things in my past in order to find a solution.

I remember feeling empty inside, like I wasn’t good enough for the world and the society that was constructed around me.

Was I really that different from everyone else?

I realized that the only thing I was really comparing myself with was the expectations and rules, which other people laid out for me in order to be considered someone who is accepted in society. And if I changed slightly, I would be ridiculed and singled out.

It’s because of this that i feel it’s so difficult for people to stand out as it takes courage, strength and the ability to overcome obstacles that will ultimately get in your way when you set out to change yourself and to be different from everyone else.

You will lose friends…

You will clash with your family…

You will be considered an outcast…

You will be labelled an eccentric…

What to do in order to change

While I will not sugar coat the hardships of making a change in your life. The only way I see this to ever be possible for you is to pause for a few seconds and ask yourself this one important question… “Why do I want to change?”

If your answer isn’t coming from the depths of your soul, then I feel you still aren’t ready to face these challenges. For me, it wasn’t until I had my back against the wall with nowhere else to go that I had to make the ultimate decision to do something about it.

But once you are ready, while the road will be tough, i can assure you… It will all be worth it in the end.

Are you ready to take the first step?

Where do you see yourself if you decide not to pursue it?