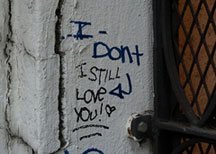 Whether we like it or not, rejection happens to the best of us. It’s perhaps the most natural and yet most difficult thing we could ever learn to deal with in our lives. Yet it’s also the most undervalued due to the negative attachment we’re often taught to give it and as a result, never seem to realize or fully grasp what the feeling of rejection could actually do for us in our lives.

When i look back at my life, i can recount numerous occasions where i’ve had to learn how to deal with rejection quickly in order to get out of my disappointment and frustrations. In fact, i would say most of my life has had some element of rejection in some way or another, which in a way isn’t really a bad thing and would probably be safe to say that it’s normal.

Dealing with rejection however is a powerful thing to be able to do because it suddenly makes living life a whole lot easier and feels less scary. You’re also able to take more risks that you otherwise wouldn’t have taken; your opportunities for growth increases and your life suddenly becomes a lot more abundant due to increased opportunities.

So why do we always fear rejection despite having to deal with it on a daily basis?

The reason why is because its all dependent on how much we value the things we’re doing.

Having understood this personally, i began to question why this was the case and started to look into the psychology behind what makes someone fear rejection in the way that they do.

When we value something a great deal, the feeling of rejection forces us to feel immense pain and disappointment due to the idea that we might not be given a second chance. This understanding gives us an idea of what causes us to value things in the first place:

We value the things that are seen as scarce, unattainable or of limited availability.

Having understood this, we can now start to form a clear picture of someone who isn’t afraid of rejection and why:

1) They do not have the same value attached to it.

2) They have abundance and freedom of choice.

The first point is pretty straight forward. One person will simply not have the same interest in the thing that another person will have towards it. So failure for them wouldn’t be of great importance.

They may also have the thing that another person values in abundance, which will naturally cause them to not appreciate it due to knowing that they will always have a replacement at any given time.

The best example is in the analogy of going to a burger bar and being told that the food they like is currently off the menu. While a rejection on the surface, it’s likely there are other branches that may have it on order which makes the proposition less enticing and hardly a big deal.

It’s not the rejection itself that really matters to us, but the value we give it that causes us to feel disappointment.

This may all be well and good, but what would be our solution if we were faced with something that we did value?

I’ve always been a big believer that in order to cope with our emotions toward our fears, we should firstly seek to develop an understanding of why this happens in order to better prepare ourselves moving forward.

Here are a few solutions based on the above explanation:

1) Truly believe that nothing in this world is limited.
Time is precious and we place a great deal of our value towards it. But in order to be truly happy, we need to be confident in the fact that nothing in this world is limited. There are always opportunities around us on a daily basis. So much so that we tend to miss hundreds of them without realizing or being conscious of it. So if one fails. Do not worry… There will always be other opportunities.

2) Detach yourself from expectation.
One of the worst things we can ever do is to expect anything, because nothing rarely ever happens in the way that we imagine. It’s what makes life worth living since it’s life’s mysteries that compel us to continue moving forward. Put failure or rejection in the back of your mind. If you go about life not expecting anything and truly believe that your happiness and contentment comes from you and only you. Rejection will seem non existent.

A happy and self-confident person will never feel long term disappointment due to these 2 main points. And i truly believe that in order to begin developing it, you must first create an abundance mindset and one in which your happiness doesn’t require external validation or acceptance.

You will over time, develop a ‘Zen’ like state where nothing will affect you, and will begin to see the world in ways you never saw before.

This will take hard work and commitment, which i’m now certain you wouldn’t want any other way based on your new found understanding. 🙂

1 Response to "How To Deal With Rejection Quickly And Effectively"