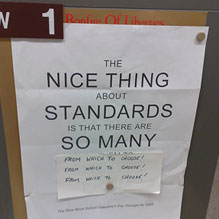 Living by standards is perhaps one of the main things which often limits a person’s potential to grow and become who they really want to be. The most difficult thing about it is that going against it would often cause conflict with the people close to you who expect the best from you through their perceived vision of you. They don’t seem to realize that what they’re really doing is limiting you as a person through their own limiting beliefs and standards.

Its something which is the most difficult thing in life to do, yet when you finally do break through, causes you to understand that your potential is not an easy feat to accomplish and comes with many challenges along the way.

You will challenge other people’s beliefs, go against expectations, refuse to get boxed in by cultural norms and family traditions and go against what other people perceive as the ‘right’ thing to do.

If you’re to go against all of this for the sake of your own personal liberation, you will have to come to terms with conflict and be willing to hurt many people close to you along the way. It is perhaps the most difficult thing to do if you come from a strong upbringing with loving intentions.

The optimal solution isn’t the easiest one to take, but is necessary in order to be happy and have peace of mind. It’s necessary because it will help you go in the direction you personally want to go and to help calve out a path for you in order to begin setting challenges and to build true self-confidence and self-esteem.

The question is how?

How can we do this without causing harm along the way? The truth is, there isn’t. We all live life with our own set of standards and beliefs which makes personal sense to us. Some of it gets engrained in us through family upbringing and traditions and most of all, through our own personal experiences.

Here are some steps you can take to help overcome this:

If someone tells or advises you something which is believed to be true through their own experience. Then the best way to truly understand is to accept it as wisdom for future reference and to then experience it for yourself at first hand. Now granted, someone telling you that it’s bad to take drugs should be common knowledge that it being bad for your health is a fact and not something you would have to experience in order to understand the implications of it. But if someone tells you that traveling to a certain country isn’t a great idea based on what they’ve read or seen in the media, then this shouldn’t stop you from experiencing it at first hand. If you want to know the truth, see and experience it with your own eyes.

Most concerns and conflict often occurs because your family and friends are either worried about your future or because they’re afraid that you will struggle. The truth is, most of these concerns often subside the minute your family witness your success at first hand. In the beginning, it’s a struggle due to not knowing what will happen. But always have faith that the path you’re taking will eventually lead to success. The more consistent you make this in your life, the more trust you will gain from the people around you moving forward.

3) Never be afraid to challenge people

If you’re ever put in a situation where you’re being treated unfairly, then there really is no other solution then to speak your mind. I have often been put in scenarios like this which has often resulted in decisions which i haven’t favored due to refusing to cause conflict and disapproval.  Never be afraid of going and asking for what you want and going against other people. Even if it results in a dismissal, at least you can hold your head up high that you spoke what’s in your heart.

What i can advise moving forward is to simply give it a go. It will be tough, but as with anything in life. It will all be worth the struggle.

1 Response to "Are You Living By Standards?"